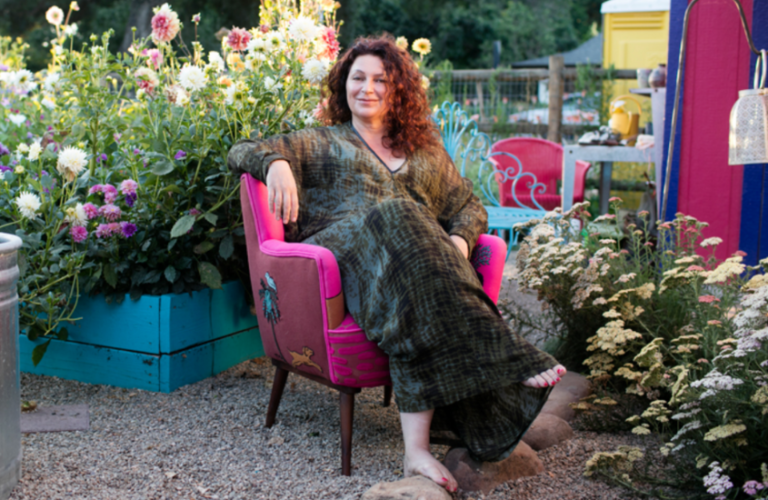 Michaela featured in YOU Magazine – her advice for *your* life

Michaela Boehm is the woman famous for putting the va-va-voom into Gwyneth Paltrow’s marriage (separate homes works a treat, seemingly). So what’s her advice for the rest of us? Martha Hayes books a consultation.

‘Can you imagine arguing with your husband in the car, and when you get out to go to Starbucks, you’re still pi**ed off with each other?’ says Michaela Boehm, intimacy and  relationship expert to the stars. ‘Now imagine doing that when you’re famous and everybody knows your business and is going, “Hahaha, they’re breaking up”. It’s horrible. I’m well suited to this job because I don’t leak information. I keep people’s s*** private.’ This is the wild-haired, mild-mannered Austrian guru’s way of reminding me that the sex life of her most high-profile client, Gwyneth Paltrow, is off limits. The actress may have recently outed Michaela as the secret to keeping the spark in her marriage – she and her husband of nearly a year, director Brad Falchuk, live in separate houses – but Michaela, 51, is as discreet as if her livelihood depended on it. Which, in many ways, it does.

‘I can’t tell you anything specific about anybody, unless they tell you about it,’ she explains, pouring coffee and laying out a bowl of fresh peaches picked from the orchard when I arrive at her organic farm in Ojai, California. ‘My very first celebrity client was so high profile, I was brought in under a blanket in the back of a chauffeured car.’

For all her discretion, Michaela is brilliant company. Wafting along her garden path like an earth mother with a love of swearing and an infectious cackle, she’s as keen to advise me on my own marriage as she is to show me the garden she curated to keep herself ‘sane’ after wild fires in 2017 nearly destroyed her home. I’m so mesmerised by the kaleidoscope of exotic blooms, echinacea plants and lavender, I don’t notice the donkeys at first. ‘That’s Elio and Luna,’ says Michaela, who also keeps chickens, pigs, goats, dogs, a cat and a tortoise. ‘I don’t have children by choice.’

Her high-profile clients – who include Grammy-winning musicians, film producers and business pioneers – have been coming and going from this farm, which boasts a teaching studio and guest house, for more than a decade. Before settling here in 2008 with her husband of 17 years, Michaela ran a busy practice in West Hollywood. But having clocked up more than 40,000 hours of counselling, she’s more selective these days.

She now sees just ten clients, and spends the rest of her time consulting and taking her workshops all over the world. Why do the rich and famous – or, as she describes them, ‘high performance’ – enlist her help and why does that fascinate the rest of us?

‘The interesting thing about fame is that it destroys those who are not able to handle it,’ she says. ‘If you have the ability to go the distance, you become something of a trailblazer – you have to be on the cutting edge to stay ahead.’

From vaginal steaming to conscious uncoupling, no one could accuse Gwyneth of not living on the cutting edge. ‘That people could stay friends after they break up? That was never heard of until Gwyneth,’ says Michaela. ‘My husband’s ex-wife was my maid of – why not? They were already divorced when I met him. She always said that her giving him away in his next marriage freed her and she felt as though she could fully move on.’

Did Michaela herself invent the famous – and widely ridiculed – term Gwyneth and her former husband, Coldplay’s Chris Martin, used to describe their 2014 separation? ‘Conscious uncoupling was a term out of a book,’ she clarifies. ‘I wasn’t working with her then. That wasn’t my thing.’

Michaela instead promotes the polarity principle: creating erotic tension by deliberately separating yourself from your partner, instead of the unsexy reality of living in each other’s pockets until you almost become the same person. But her idea that couples should take as much space as they need for their lives to be both functional and their relationship exciting invites cynicism – after all, who can afford two houses? ‘This is the thing everyone is clamouring about, “Gwyneth and Brad are living in separate houses. How bizarre.” Er… no, they are not normal people; they can afford to live separately. Also they have children from other marriages. For most people, not spending every free moment together has the same result.

‘In the UK, in particular, there is a whole culture around men going away with men, women going on vacation with women, and having separate interests. Living apart is an extreme example of a very simple remedy. You don’t even have to sleep in separate rooms; try having one room where all the stuff that you like is in and another for your partner.’

Michaela’s own ‘she shed’, of place in the garden in psychedelic shades of pink and is impossible to miss. ‘I’m a crazy lady; [my husband] likes things that are zen and white.’ The couple in separate properties on the farm and Michaela estimates that she’s on the road eight months of the year, so she certainly what she preaches.

‘I found I got more irritated and short-fused when we spent too much time together,’ she explains. ‘Then I would go away, and it was like, “Oh.” Looking at the principles of polarity, we just figured, “Let’s try separate rooms”, then we’d say, “Hey, my room or yours?” It was so cool.’

Michaela left Austria for the US when she was 27 and on the rebound from a failed relationship. Long story short: ‘This was the beginning of raves and ecstasy and my clean-cut soon-to-be husband became a raging drug addict. I had the wherewithal to go, “this is bad news” and I pulled the plug.’

Where did she get the courage to do that? ‘I was definitely brought up well. I’m probably one of the few psychologists who wasn’t f***** up by their parents,’ she laughs. ‘Mine have been married for 53 years and still have a spark; I learned a lot of the things I’m now teaching people from them. My father had a very stressful job and he would come home from work, greet us then go into his bedroom for an hour to himself so he could transition from work to family. There was no breaking that rule unless it was an emergency.’

In theory, Michaela’s teachings – outlined in her book The Wild Woman’s Way: Unlock Your Full Potential for Pleasure, Power and Fulfilment – pull apart the modern relationship model as we know it. ‘When two people get together, opposites attract so it’s sexy and exciting. When they move in together, commonality builds. The more you have in common, the less sexually exciting it is,’ she explains. ‘The problem is, people think waning sexual attraction is a relationship issue. It’s not; it’s a physics issue. It’s not a death sentence, but it’s also not inevitable. It is laziness on one side and lack of education on the other.’

I tell her that last night my husband (of less than three years) and I were in our ‘comfy clothes’ by 8pm, curled up in front of the telly with a bowl of pasta. That’s what’s meant by ‘Netflix and chill’ in our house. ‘Sometimes, there’s nothing wrong with that,’ she reassures me. ‘It becomes a problem if that’s the norm, and you no longer have something to say to each other. At that moment, remember what worked when you dated and didn’t spend all your time together.’

I think I’m not alone in wondering how much sex is ‘enough’. Should we be tallying up each week? ‘I don’t think there is a fixed number, it’s how both people feel. If you’ve just had a child or you’re highly stressed, you’re probably not going to want sex at all. The amount varies widely within a long-term relationship. It’s the qualitative aspect of how excited you are to engage with your partner.’

So if the waning of sexual attraction in a healthy relationship is preventable, how do we tackle a loss of libido in later years and is there a future-proof method? ‘A lack of libido is to do with there being so much noise in your system that you can’t hear the subtler sounds – like being at a rock concert – and pleasure is only a whisper,’ she says. ‘They say the “turn-on” happens in the brain – nah, not really. You have to be able to feel your body.’

In order to do that, we must differentiate between our ‘go’ mode (which we use at work) and ‘flow’ mode (what we need for sexual pleasure). ‘When you’ve had eight  hours of “go”, “flow” isn’t going to happen naturally. But all you need to do is some hip circles. Ten minutes of wiggling about will get you back in the body. You could sit in your office chair to do that.’

‘Then, let’s say you decide, “I’m not going to put the pyjamas on tonight.” Go in the bathroom, have a shower, put on some oil and play some music; now you’re at 80. From there, it doesn’t feel so horrendously un-doable, does it?’

No, it doesn’t. And with that, she packs me off with a copy of her book and in my step. Now, where’s that hand cream?

If two people are together all the time, they depolarise and there’s no longer friction. You need to exist in opposite spaces for there to be friction, which is good. You can re-create this by spending enough time apart so that when you come back together there’s a freshness.

TIP: When you come home from work, spend 15 minutes apart. Try having a shower, watching TV or taking the dog for a walk so you reset, before coming back together in a romantic sense.

People make an effort to have a date night and get dressed up – then look at their phone during dinner and suddenly it’s, ‘Did you remember to buy milk?’ That’s an in-front-of-the-TV conversation.

TIP: Introduce boundaries, such as ‘no phones in the bedroom’. Have regular meetings to sort out trivial, logistical stuff so that when you have a date night you can talk about other things.

3. Have your own interests

You need to have interests outside the relationship. The easiest way to do that is by reading and trying new things so that when you come home it sparks conversation. Doing things that are out of the ordinary is the best thing for keeping sex alive.

TIP: Usually sit on the sofa? Take a blanket out into the garden. Routine is the killer of excitement, so all you need to do is mix things up.

If you touch each other all the time, subconsciously it will no longer be exciting when your partner actively touches you, because you’re so used to it.

TIP: If you’re a bit bored sexually, one of the easiest ways to get excited again is to not touch or kiss for a couple of days before a date night. In a short period of time that will make your body go ‘woooo!’

Red Table Talk with Michaela – “How to Heal a Broken Heart”

Michaela featured in the The London Times